No Shadow Left Behind: Removing Objects and their Shadows using Approximate Lighting and Geometry

Give us an image and an object to remove from it; we can remove not only the object but its shadows too.

Removing objects from images is a challenging problem that is important for many applications, including mixed reality. For believable results, the shadows that the object casts should also be removed. Current inpainting-based methods only remove the object itself, leaving shadows behind, or at best require specifying shadow regions to inpaint. We introduce a deep learning pipeline for removing a shadow along with its caster. We leverage rough scene models in order to remove a wide variety of shadows (hard or soft, dark or subtle, large or thin) from surfaces with a wide variety of textures. We train our pipeline on synthetically rendered data, and show qualitative and quantitative results on both synthetic and real scenes.

This work is in the same space as our previous paper on emptying rooms. In that work, we had to remove all the objects from the room, while our new work allows us to remove some objects and leave others.

In our previous work, we did try some experiments where we removed some objects, using our scanned 3D model for the objects we did not remove. The results did not look very good because of the low quality of the scanned geometry. This new paper uses deep learning to edit a real input view of a scene by using a rough 3D model (even rougher than the scans in our previous work) to give hints as to where the shadows of a particular fall.

Editing images by virtually inserting, removing, replacing, or moving around objects has a lot of applications. Doing so in a visually realistic fashion usually involves using some approximate model of the scene. If you have a model of the scene, you can semantically edit that model (whether that means relighting or changing around 3D geometry) and then render the model directly. However, as alluded to previously, directly rendering this model usually leaves something to be desired, since the model will contain some unavoidable inaccuracies.

The differential rendering process from Debevec’s Rendering Synthetic Objects into Real Scenes work has been the only method that bridges the gap between renderings of approximate (edited) scene models and the original input image*.

This method was designed for object insertion, and doesn’t work directly for removing objects.

Removing an object using differential rendering doesn't work - the shadow boundaries don't match, so we fail to remove some parts of the shadow while overbrightening the image where we thought there was shadow..

We use deep CNN to do the differential rendering instead, operating on the input image as well as the renderings of the edited and unedited scene model. One benefit of this formulation is that it is purely 2D - our deep network doesn’t have to do as much reasoning about light propagation in 3D, since the rendering process does that already. One handwavey intuition is that our network just has to do a guided 2D segmentation - the renderings of the scene model give it a rough segmentation of the shadow region, and our network just has to make a more accurate segmentation on the input image.

I won’t go into too much detail about our architecture here (see the paper for full details), but I’ll highlight the key piece that gives us better results. A simple U-Net for deep differential rendering (plus a separate inpainting network) has two big problems:

Our key architectural change is that we first perform an intrinsic decomposition of the original input image, decomposing it into a lighting image and a texture image.

A synthetic scene showing that a simple U-Net followed by an inpainting step is insufficient. The top row shows the inputs: the original image, and renderings of the scene model before and after the central chair is removed. Notice how the scene model underestimates how far the chair's shadow extends. The simple U-Net plus inpainting setup fails to remove part of the shadow (green circle) and hallucinates shadows in the inpainted region (red circle). Adding an intrinsic decomposition considerably reduces both of these artifacts.

This intrinsic decomposition stage has the following benefits:

Here is an example of our intrinsic decomposition on a real image: 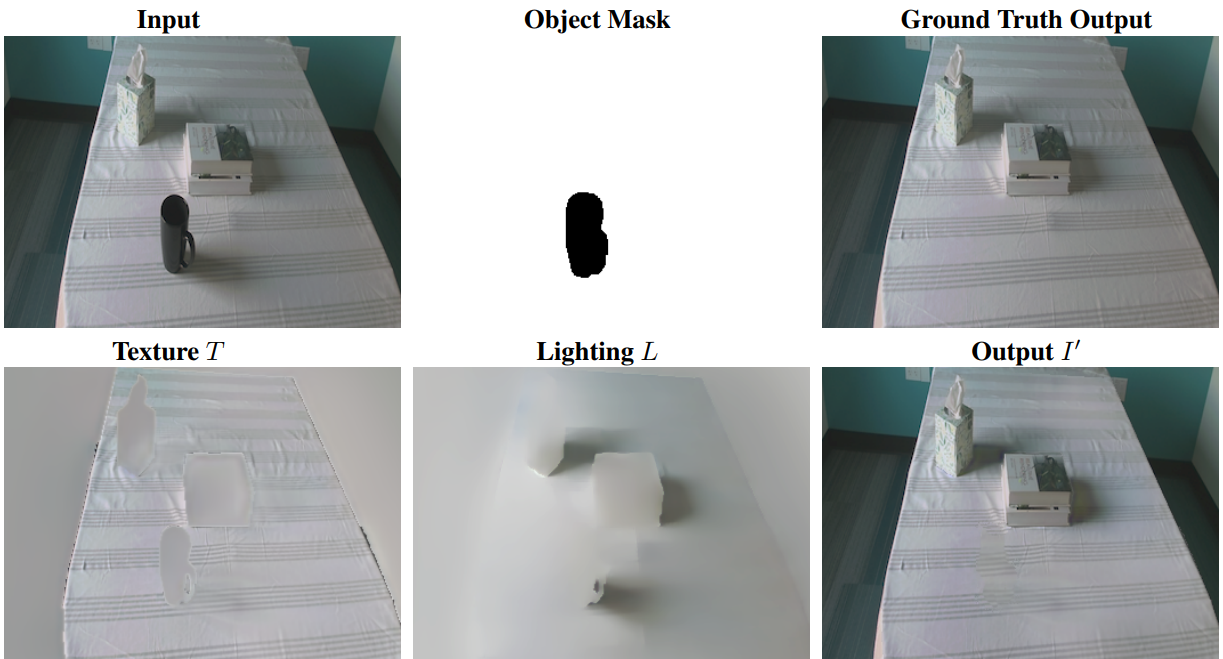 Intrinsic decomposition into lighting and texture on a real scene.

Synthetic scenes. We compare our system to two object removal baselines: an image-to-image translation network based on Pix2Pix which is supplied with our renderings of the proxy scene, and a state of the art inpainting method that inpaints both the removed object and an explicitly specified shadow mask.

Real scenes. We compare our system to two object removal baselines: an image-to-image translation network based on Pix2Pix which is supplied with our renderings of the proxy scene, and a state of the art inpainting method that inpaints both the removed object and an explicitly specified shadow mask.

This work was supported by Google and the University of Washington Reality Lab.